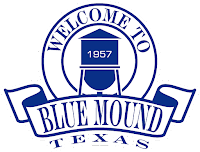 The City Council of the City of Blue Mound will hold a Special Called City Council Meeting and Budget Workshop Monday, August 08, 2016 in the City Hall Council Chambers, 301 Blue Mound Road at 7:00 P.M. for the following agenda:

2.      Citizens Participation (Limit to 3 Minutes – Complete Speakers request form and Submit to City Secretary prior to the start of meeting)

I hereby certify that the above agenda was posted on City Hall Bulletin Board Friday, August 5, 2016 by 5:00 p.m.

This facility is wheelchair accessible and accessible parking space is available. Request for accommodations or interpretive services must be made 48 hours prior to this meeting.  Please contact the City Secretary’s Office 817-232-0663 for further assistance.